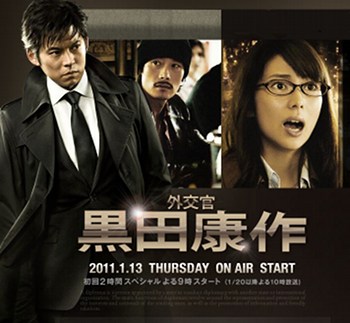 Japanese Ministry of Foreign affairs diplomat Kosaku Kuroda (Yuji Oda) is dispatched all over the world to protect Japanese interests and citizens.

With the help of the information received from John, diplomat Kosaku Koroda is able to prevent an attack on Shoko Mikami by extremists, but as he investigates how the attacker knew of Mikami's movements, Takeshi Shimomura jumps off a building to his death.

Meanwhile, a suspect emerges in the murder of a university professor in Japan that took place recently. The suspect is none other than Takeshi Shimomura. Detective Rikako Ogaki (Kou Shibasaki), who first discovered the professor's dead body, travels to San Francisco with Takeshi Shimomura's daughter Rui (Kaho). Diplomat Kosaku Kuroda awaits for them ...

Lorenzo Sep 18 2016 5:12 am Just wanted to leave a comment in defence of this series - yes the rating did fall away and, in common with a heck of a lot of series, it does suffer from mid-season sag.

It is not a geewhiz James Bond gadget-a-thon but more a grounded thriller with the usual exaggerations of a visual drama. Personally I thought it was quite watchable.

I especially liked that there were things never said about some of the relationships that the viewer has to work out.

The "murder" all that time ago is a very significant event both in the main character's life and in the plot. This is why it is often referenced.

John Nagle Apr 15 2014 12:25 am This show starts out well. It looks at first like it's going to be an exciting drama about a diplomatic trouble-shooter. But by episodes 4-5, it's a slow-moving police procedural. Kuroda isn't a James Bond. He's just obsessed with the murder of some old colleague years ago.

Others seem to agree. Notice how the episode ratings drop.