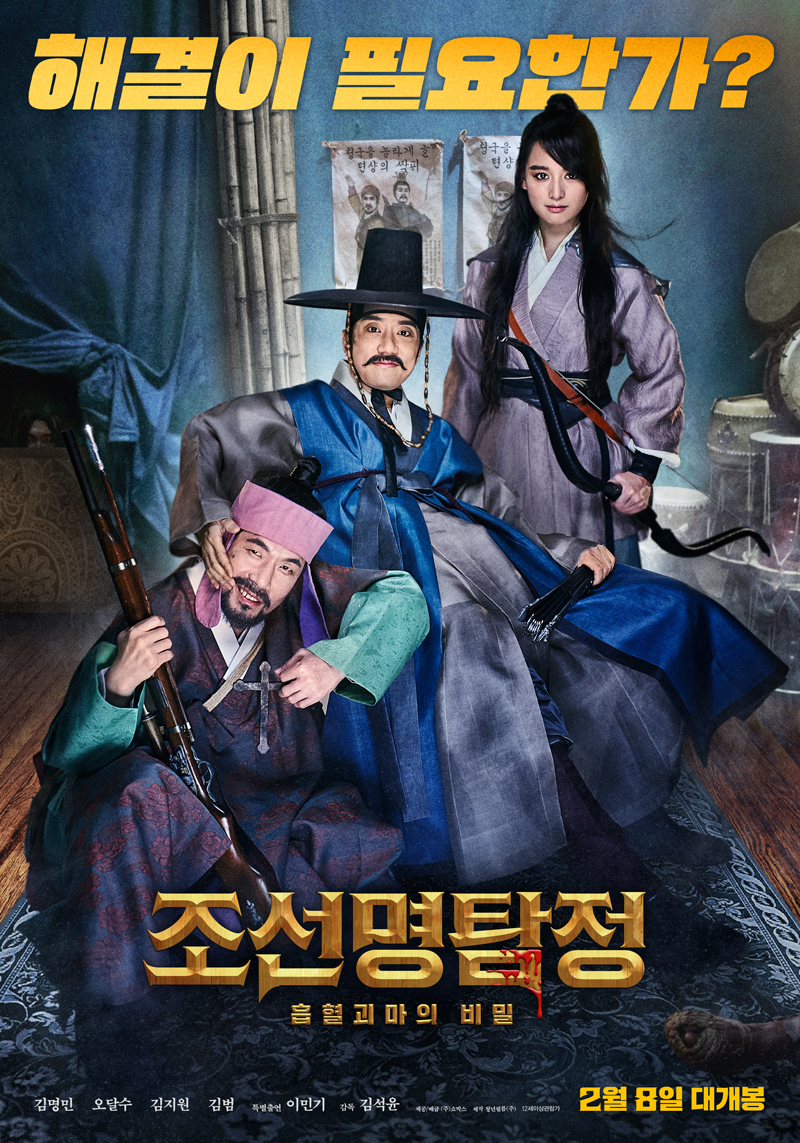 Kim Min (Kim Myung-Min) suspects vampires exist in Joseon and seeks information. One day, he is requested to investigate a serial murder case on Kanghwa Island. There, bodies are found that are burned to death. On the island, Kim Min and his partner Seo-Pil (Oh Dal-Su) run into a beautiful woman (Kim Ji-Won) with incredible strength. Kim Min believes she may be involved in the case. The woman tells Kim Min that she has lost her memory and doesn't even know her own name. Kim Min needing her strength, asks her to help him investigate the murder cases. With a clue left behind on a dead body, they try to figure out who is the next target.

Richard Jan 29 2020 7:47 pm There were a lot of funny moments in this movie. The scene where they were doing finger hearts and 2 hand hearts was good. Another scene where the detective paints 2 dots on one guy neck to signify vampire bites was also good. Hahaha

Xhalen Aug 17 2019 4:20 am Came here to know the name of Kim Jiwon's husband (Prince? King?) Does anyone know? Because he looks really familiar.

badiya Mar 26 2018 4:25 pm kim ji-won was just PERFECT!, the film was amazing like the 2 previous part!!!! hope they will made other parts, yeahhhh fightiiiiiiiiiing!

Unknown Mar 21 2018 8:56 am You guys should bring a box of tissue because that gonna be a sad scene about her story.

tim Mar 18 2018 2:05 pm guess the next detective k movie would be zombies, never disappointed, this movie is as hilarious as the last two, especially that "old boy" scene, guess detective k does drink expresso, can't wait for the next movie.

Paradox Feb 16 2018 2:22 pm The anticipation has been killing me waiting for another Det K to come out! Can't express how happy I am that they kept the same actors who "killed" it with their great acting in all the others! Woohoo!

badiya Feb 05 2018 11:51 am deabaaaaaakkkkkkkkkkkk wooooooo, am so happyyy i was waiting for the 3rd part!

mina Aug 29 2017 10:48 pm Will watch the previous part of the series so that i could prepare myself for this 3rd installment. Will watch for kim ji won! hihi. Interesting plot though :D

valerie curl Jul 16 2017 9:40 am Looking forward to watching this 3rd film in the Detective K series. I loved the two previous films. So funny and entertaining and full of action. I hope this one maintains the humorous lines and fast pace.

KoreanGirlLovers Jul 06 2017 7:58 am Lee MinKi only for special appearance?? hurm ..hope he will coming with a new drama soon ..