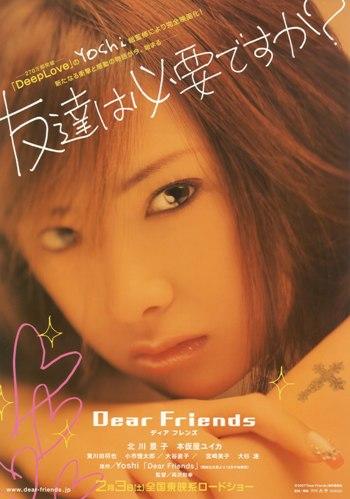 Dear Friends follows a high-school student named Rina (played by Keiko Kitagawa) who believes that friends are not necessary and that they can only be used in times of need. Thus, she is unable to maintain a decent relationship with her friends and classmates. Her family's relationship is also lacking; her father does not care much about his family and her mother is over-protective.

Rina eventually discovers that she has a terminal illness and becomes hospitalized for an indefinite amount of time. In the hospital, she is not visited by her family, but by one of her classmates named Maki (played by Yuika Motokariya). Although Maki tells Rina that they were friends in primary school, Rina does not remember her, so Maki takes the opportunity to re-connect with her. A young girl (played by Mao Sasaki) who is also hospitalized tries to become friends with Rina, but she holds fast onto her mantra of friends being unnecessary.

Throughout her hospitalization, Rina begins to lose hope as her well-being falls apart, and she decides to jump off the hospital rooftop as she feels that no one no longer cares about her. However, she is stopped by Maki, who stabs herself in the chest with a knife and declares that she will share the same pain as Rina and that she does not want to lose her friend. Rina shows some hope again when she realizes that she can find friendship in Maki.

Jack Oct 18 2019 1:10 pm I really love this film. If I were the girlfriend’s boyfriend, or the DJ or the bartender I would certainly enter her. What a film. She has not been as gorgeous since.

dean Jul 13 2019 8:19 pm Are anyone's parents so weak and ineffectual? If that were my daughter I'd put a chastity belt on her. I mean the girl is hawt

Olga May 03 2019 4:29 pm Pretty girls for sure. The scene on the dance floor is evocative. I am not sure why she wouldn't sleep around more because she can get men. The illness was sad.

Mike Apr 29 2019 11:23 am Rina was sexy and gorgeous. My goodness Keiko is beautiful. No wonder her firend's boyfriend was in her. Who wouldn't be?