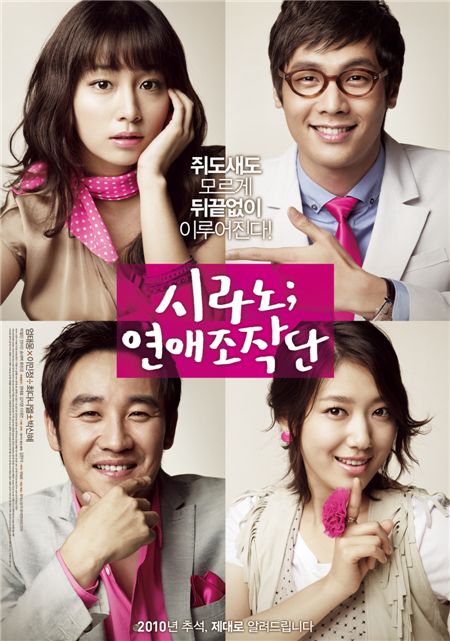 The Cyrano Agency consists of four people from a theater troupe who offers a unique cupid service for lovelorn clients. The company intricately devises and implements schemes, custom tailored to match the interests of their intended target, for the ultimate goal of obtaining romance for their client. The boss and mastermind behind the agency is Byung-Hoon (Uhm Tae-Woong).

Things take a strange twist at the Cyrano Agency when a new client named Sang-Yong (Daniel Choi) enters their office. Sang-Yong is a straight-laced financial trader who is rather inept with personal relationships. He has fallen for a free spirited woman named Hee-Joong (Lee Min-Jung) and seeks out the Cyrano Agency's help. The boss for the Cyrano Agency, Byung-Hoon, then notices that Hee-Joong is his ex-girlfriend with whom he has really never gotten over .... Q&A took place after a screening of "Cyrano Agency" at the 2011 Jeonju International Film Festival on April 29th. AsianWiki editor Ki Mun was there and transcribed/translated the session.

feelontee Oct 24 2016 7:17 pm Love it, and why this actor (Uhm Tae-Woong)never age? he was even a match to young actresses. amazing movie

Windy Atika Sep 26 2016 8:47 am @dhermie if you think it's boring to you don't watch it and shut up!! Keep your opinion to yourself this film was great .. if it was boring how come it got so many awards?? She even got more fame from this film and the first time she got baeksang award for most popular actress and got 4 year conclusive win! This movie is one of many dramas , movie , etc that help her to be so succesful to where she is now

dhermie Mar 29 2016 5:02 am I'm so dissapointed in Park Shin hye. So, she read this extremely boring script and still decided to act in it...Most boring film of the century

ace Oct 18 2014 12:13 pm I noticed all the awards etc this movie has garnered, and while I think every one is perfectly justified, I found the omission of Director Kim Hyeon-Seok and Cinematographer Kim Woo-Hyung's work rather startling. This was a really cleverly shot film by people that really know the craft of visual storytelling. Overall a really fun movie. I'd recommend it if you are in mood for a new(ish) twist on an old tale.

Zinv Jul 06 2011 2:15 am First of all I would like to thank my messed up internet for taking me to the free download Cyrano Agency website.. man my 3rd movie... so funny and it was really one of a kind, the story just moved me so much.. 8/10

Ki Apr 29 2011 1:07 pm I had the opportunity to watch "Cyrano Agency" for the second time, this time at the 2011 Jeonju International Film Festival. Even though I watched it before and thought it was just OK, the chance to hear the director speak and see some of the cast members from the film made me line up for a second screening. Not sure what changed from my initial impressions, but I really enjoyed the second screening way more than the first.

I'm sure everybody can find bits and pieces of the movie to relate to their own personal lives which really makes the movie feel more intimate. Not to mention that excellant soundtrack. The dialogue this time around jumped out more and impressed me. Lines like when Uhm Tae-Woong & Lee Min-Jung were together at Lee Min-Jung's apartment late at night and Daniel Choi rings the doorbell, Uhm Tae-Woong utters "Don't open the door..." which I think was meant literally and figuratively. Really felt for the guy. Very sweet movie which I will watch again sometime down the road. Excellant film!

Jonny Apr 09 2011 10:02 am First saw this on the Melbourne-Incheon flight in November '10. Loved it so much I have watched it heaps more times since. This film has also got me into other Korean films and music. Acting was great, particularly on Daniel Choi and Lee Min-Jung's part. Humourous and light-hearted towards the beginning, the climax is far more emotional and uplifting. Great show guys.

Ki Oct 04 2010 2:42 am I was looking forwards to watching this due to an overload of recent violent Korean films (Moss, Man of Vendetta, Bedevilled, The Man From Nowhere, I Saw the Devil). "Cyrano Agency" isn't a disappointment - there's some funny scenes and the idea of an agency to help someone in need of romantic help was good. I have also read a lot about Park Shin-Hye and her popular performance in the drama "He's Beautiful" so was curious to checking her out in a film. Well after watching the film I thought the movie was just O.K., but felt a little bit of a let-down after the movie's first 30-60 minutes which was a lot better than the second half. As you first watch the Cyrano Agency help a guy nab his sweetheart (a girl that works at a coffee shop) and then get into the main event - helping Daniel Choi nab his dream girl who just so happens to be the ex-girlfriend of the Cyrano Agency's president - you felt like the movie was going to go up another level in hilarity/romance/goofiness/what not. In actuality the movie kind of hits its peak right there and the conflict between Eom Tae-Woong, Daniel Choi & Lee Min-Jung lingered around and couldn't hit the high points of the film's first half. With that said the movie was still a sweet film and had enough cute/funny moments to make it worth checking out. Just don't expect a classic and you will be A-OK.