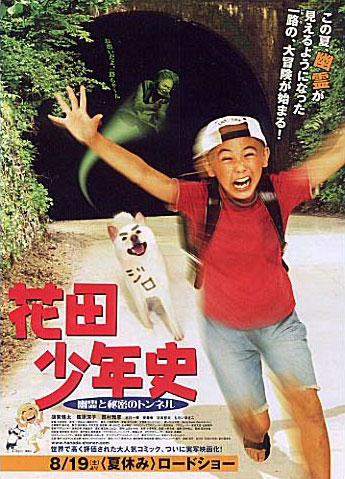 There is a peaceful country town by the sea. The naughty boy called Ichiro Hanada began to see ghosts in this summer ! After he was hit by a truck, he got this special power which is annoying him. He sees an old neighbor lady’s ghost, a high school girl’s ghost who appears in the tunnel, his best friend Sota’s father’s ghost – several ghosts comes to see Ichiro to talk about their matters and to ask their favors. He is in a panic because of these ghosts every day, and one day, a man’s ghost appeared to tell him that he is Ichiro’s real father! Is there any secret story of the Hanada family which every member is always cheerfully laughing? Here is to start of Ichiro’s big adventure for finding the truth!

This original book is the big hit comic in Japan called "Boy Meets Ghost" written by Makoto Isshiki (published by Kodansha). In 2002, the animation of this book was broadcasted by the NTV net, and received the best animation award of Tokyo International Animation Fare in 2003 and the best long animation award of the 8th Asian Television Award.

Harley Hartwell Jan 14 2013 5:10 am I seriously like the film! Since I am a Bruneian, please sell the books of Boy Meets Ghost in Brunei, or maybe the CDs will do. I would like to watch it again!!