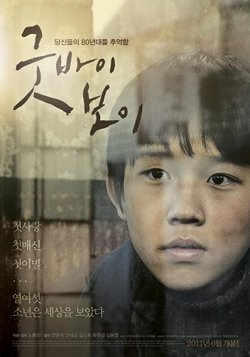 Winter 1988 - Middle school student Jin-Woo (Yeon Jun-Suk) lives with his unemployed alcoholic father (Ahn Nae-Sang) and his unhappy mother (Kim So-Hee) who frequently attempts to runaway from home due to her unhappiness with her husband. Jin-Woo's older sister (Ryu Hyun-Kyung) does whatever she wants and fumes at her mother for the life she lives. Jin-Woo feels sorry for his mom who has to support the family alone and starts to work as a newspaper delivery boy. At the newspaper distribution plant, he meets another boy named Chang-Geun (Kim Dong-Young) who works hard to save money. Jin-Woo learns from Chang-Geun things like how to smoke, drink alcohol and how to deal with girls. Jin-Woo learns about life through Chang-Geun.

One day, Jin-Woo sees his mother working at a bar. Chang-Geun, unaware that the woman is Jin-Woo's mother, laughs at the woman. Jin-Woo doesn't tell him that the lady is his mother. Jin-Woo senses that his sweet childhood days is over and the world is like the jungle that Chang-Geun described. Jin-Woo's father comes back home after a year away and nobody greets him anymore ...