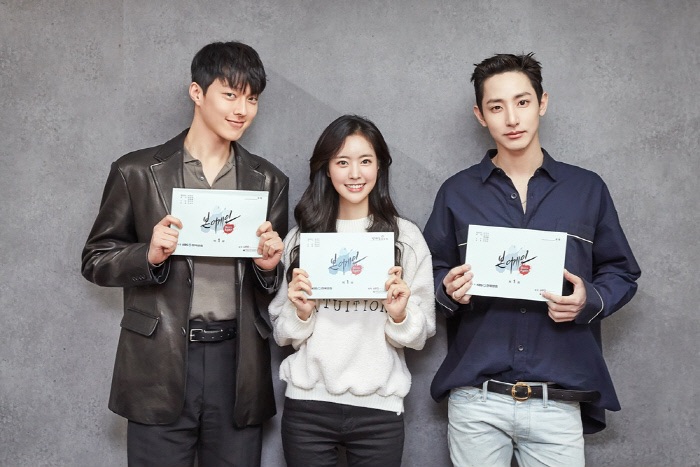 "Born Again" tells the story of 2 men and 1 woman who become involved in the 1980's and again in the present day through reincarnation and fate.

In the 1980's, Kong Ji-Cheol (Chang Ki-Yong) denies his fate to become devilish like his father. In the present day, Cheon Jong-Beom (Chang Ki-Yong) is a medical school student.

In the 1980's, Jung Ha-Eun (Jin Se-Yun) suffers from dilated cardiomyopathy. She owns the used bookstore "Old Future." In the present day, Jung Sa-Bin (Jin Se-Yun) is an instructor of archaeology. She pets nameless remains warmly and figures out their story. The secret of those nameless remains are uncovered.

kimyum Feb 23 2020 7:59 pm it's nice to see that after Queen Love and War, Jin Se-Yun have new another project series like this. Honestly I'm happy for her success in her finished historical drama recently, she was bright and talented, I'm looking forward this new series because of her, she deserves of what her achievement now, because she was really hardworking and professional actress, I also hope for the success of this new series, fighting! for Queen Jin Se-Yun :-D:-*

Kimac Feb 11 2020 8:58 am Yea.. so excited for Jin Se Yeon. I just finished watching her drama, Selection Queen Love and War, on TV Chosen. She is great in this drama, and have great chemistry with her leading man. Cant wait to watch her in modern role, and hope she has great chemistry with these 2 leading man. Also hoping she has some fighting scene. She is good in any genre.

Miane Feb 03 2020 5:29 am it seems the characters of the main leads were interesting, I was excited in this drama, thanks they all confirmed because in those pictures they looks have great chemistry, more power! to Jang Ki-Yong, Jin Se-Yun and Lee Soo- Hyuk :)

Keila Feb 01 2020 5:04 am I thought Jin Se Yeon was reunite again for Kim Min Kyu, I can't move on for my KimJin couple, but suprisingly seyeon has this drama offered, for the sake of my KimJin honey couple, whatever uri seyeon completely decisions, I will support her no matter what..fighting ~seyeonssi~

taku Jan 31 2020 8:20 am Hope one day Chang Ki-Yong will be reunited with Nana in other drama. Their chemistry in Kill It were very good.

Jei Jan 30 2020 10:20 am I wish se yeon will accept it!! Even though many are saying she is still lacking, experiences makes a person change and I know she can pull this off!

Licorice Jan 30 2020 9:04 am Happy that Jin Se-Yeon got the offer after Queen: Love and War. But so far, her 4 modern dramas were awfully written. I can only hope for the best. Waiting for the update news.

Nana Jan 30 2020 8:21 am Jin Se Yeon has been offered the female lead role, so exited cuz she’s been getting better lately (acting’s?