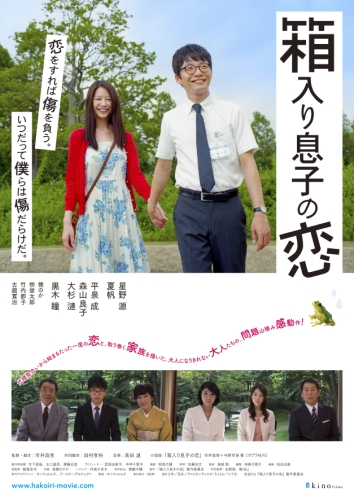 35-year-old Kentaro (Gen Hoshino) is a social misfit and has never dated a woman in his life. He lives with his parents and holds a modest job in city hall. Kentaro doesn't have any friends, nor received a promotion in 13 years at his place of work. His parents worry about Kentaro being single for the rest of his life. They then go to a parental matchmaking event, hoping to find a woman to introduce to their son.

During the meeting, Kentaro's parents has only one other couple approach. The father is Akita Imai (Ren Osugi) and his wife (Hitomi Kuroki). They exchange profiles of their children. Kentaro's parents are impressed with the Imai's beautiful daughter Naoko (Kaho). Meanwhile, Akita Imai is the president of a successful company and, after reading Kentaro's bio, believes he is beneath their daughter. The Imais leave, only saying thank you. They also don't reveal to Kentaro's parents that Naoko is blind.

Kentaro and Naoko will soon experience love for the first time, but will it be fleeting? Watanabe Apr 01 2017 12:12 pm I'm over 40 and I live exactly as Kentaro does :D It was fun watching and rooting for Kentaro and Naoko to be together. Kaho is beautiful.

lesle Feb 01 2015 8:27 pm The Plot description asks, "Kentaro and Naoko will soon experience love for the first time, but will it be fleeting?" Answer: Not fleeting, but impactful, particularly for Kentaro. It's a hard way to learn Braille, but he's game.

I cried, I choked up, I laughed, and I'm a guy. Watch this film!