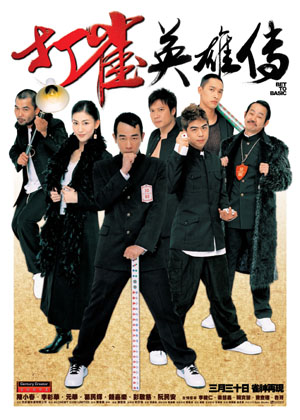 Inferior gangster Flying Dragon (Kar Lok Chin) has a bad habit of gambling, he thus offends the three great gamble deceivers. Luckily his younger cousin, Roy (starring Jordon CHAN), who comes back from America is extraordinarily lucky, he can win every round of the game and saves Flying Dragon. Flying Dragon hence brings Roy to Mahjong casino to earn money for him. Roy observes the rivalry between two Mahjong geniuses HUA San Yuan (Wah Yuen) and GE He Qing (Eric Kot) by chance, he witnesses the fate of them - one turns to be insane and one becomes bankrupt, and decides not to snatch the reputation of "The King of Mahjong". Though Roy has no desire to seize the fame, his good luck elicits the worry of aggressive Mie Luo (Samuel Pang) who then plans to harm Roy....

HUA San Yuan realizes that Roy is gifted with luck, so he pleads him to be his disciple. Mie Luo knows it and sends people to beat Roy up, but later they mistakenly hurt Flying Dragon. This motivates Roy to learn the professional Mahjong techniques from HUA San Yuan, he gradually develops an intricate relationship with HUA San Yuan's disciple Pei Er (starring Rain LI). However, Pei Er and Mie Luo are in fact lovers. Pei Er determines to find out the source of luck of Roy and help transfer the luck to Mie Luo. When Roy is in deep desperation, GE He Qing suddenly recovers and cooperates with HUA San Yuan to train up Roy's Mahjong techniques. They decide to foster the new generation of "The King of Mahjong"...