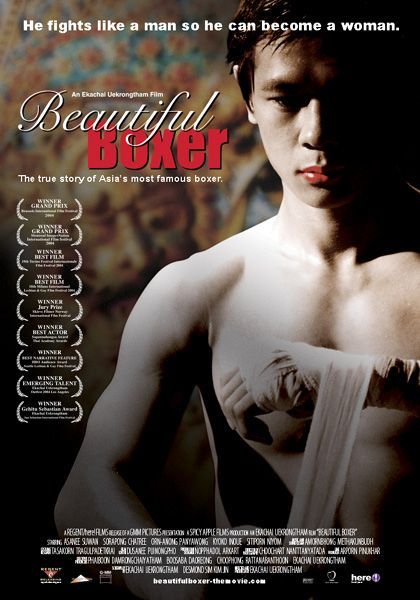 Based on the true story of Thailand's famed transgender kickboxer, Beautiful Boxer is a poignant action drama that punches straight into the heart and mind of a boy who fights like a man so he can become a woman. Believing he's a girl trapped in a boy's body since childhood, Parinya Charoenphol (affectionately known as Nong Toom in Thailand) sets out to master the most masculine and lethal sport of Muay Thai (Thai boxing) to earn a living and to achieve his ultimate goal of total femininity. Touching, funny and packed with breathtaking Thai kickboxing sequences, Beautiful Boxer traces Nong Toom's childhood, teenage life as a traveling monk and grueling days in boxing camps. Shot in 9 provinces across Thailand and in Tokyo, the film also features a series of explosive matches where Nong Toom knocks out most of his opponents in Thailand and Japan. Directed and produced by Ekachai Uekrongtham, the film stars Asanee Suwan, a real-life kickboxing champ as Nong Toom. The role earned him the 2004 Supannahongsa Award (Thailand's equivalent to the Oscar) for Best Actor. Beautiful Boxer also features compelling performances by Thailand's award-winning actor Sorapong Chatree in the role of Nong Toom's coach and former Miss Thailand Orn-Anong Panyawong as Nong Toom's mother. Kyoko Inoue, one of Japan's top female wrestlers plays herself in the film. She has fought with Nong Toom in real life back in 1988. That historical match was reenacted for the film in a dramatic sequence shot at Toyko Dome. Nearly all of Nong Toom's opponents in the film are also professional kickboxers in real life.