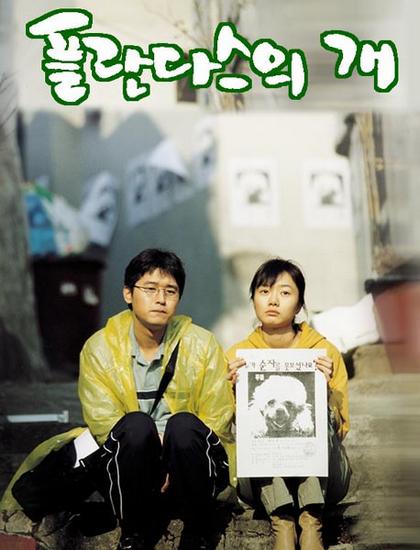 Yun-Ju (Lee Sung-Jae) has more than enough problems these days. His wife is pregnant with their first child, but has to work to support them. Yun-Ju is still studying to become a professor at his university. Unfortunately for him, to become a professor he has to bribe the dean with a $10,000 gift. What is worse for Yun-Ju is that his neighbor’s dog barks incessantly at nigh making his frail nerves worse.

One day, while Yun-Ju is leaving his apartment, he spots his neighbor’s dog standing by the doorway. Without thinking, he picks up the dog and dashes for the roof of his apartment complex. Yun-Ju dangles the dog off the roof and is about to throw him off, but an old lady comes up to dry her radishes and Yun-Ju quickly leaves with the dog. Yun-Ju takes the dog into the basement of the apartment complex and locks him away in an old wooden closet.

The next night Yun-Ju hears the same barking dog and runs out to see an old lady walking into her apartment with the barking dog. Yun-Ju realizes that he stole the wrong dog!

Yun-Ju finally mangages to steal the barking dog at night and attempts to throw the dog off the roof of his apartment complex. Meanwhile, Hyeon-Nam (Bae Doo-Na) is on the adjacent apartment building roof and watches Yun-Ju with her binoculars. Hyeon-Nam works at a dead-end job and just hopes to becomes famous one day. She realizes that her moment could arrive soon if she catches Yun-Ju ...

brian Oct 03 2009 7:17 am Ive recently been introduced to Bong Joon-Hos films: The Host, Memories of Murder and Barking Dogs Never Bite, and can say he is a fascinatig director. I would not say BDNB is his best film, but im appreciative of the acting, characters and sitations. Ive only seen it once on DVD, so far, and will need to review it in the light of the above comment. Bae Du-na's character certainly imagines heself behaving heroically, inspired by a bank teller.....But at the end, her assailant is defeated by her fat friend! One comical character revealing scene is where witnessing the dog being dropped from the building, Baes idealistic character drops the binoculars, and she and her pragmatic friend rush down, but one is concerned for the dog, the other for the binoculars... BNDB still looks like a student work: lacking the resources available for MOM and The Host. The cinema is raw, not refined.

Ki Sep 03 2009 2:40 am What an absolutely brilliant and creative film. You’re probably never going to see another film like this and it’s not even a sure thing that you will like it. The film doesn’t easily fit into any one category, the movie is part black comedy, part satire and part drama. Yet, the film is one amazingly original film that is just so compelling on so many different levels.

Barking Dogs Never Bite is one of those movies that will wow some viewers over and perhaps turn off other viewers. For instance, the animals in the film were treated cruelly by some of the characters (hence in the beginning of the film it is stated clearly that “No Animals Were Harmed in This Film”). The humor is bizarre at times and the plot unusual. With that said I will say that I was amazed by the film from the start.

This was the first film directed by Joon-Ho Bong, who went on to make Memories of Murder and the Host and I will say that Barking Dogs Never Bite is his best film. Barking Dogs Never Bite was also the movie that introduced me to the amazing actress named Bae Du-Na. She has an incredible knack for expressing a wide range of emotions with just her eyes. She did dominate the screen at all times, but the male lead that played Yun-Ju, Sung-jae Lee, was certainly no slouch in his difficult role. Through the the early portions of the film, his character appears as somewhat of a cruel or heartless person but as the movie progresses, his character becomes much more admirable as the audience becomes aware of his situation.

In the film, Yun-Ju could only become a professor by giving a bribe to the dean of his university. Furthermore his wife was pregnant and still had to work to support him. In a brilliant and underhanded way Joon-Ho Bong used the apartment tenant’s propensity to get new pets to parallel Jung-Hu’s desire to get his new job position. It was a perfect way for Joon-Ho Bong to show the way common people in Korea have to adjust to a society that is growing in leaps and bounds economically but may or may not be growing as fast morally. Sounds odd you say? Well let me explain.

Yun-Ju walks over to the apartment complex’s maintenance worker and complains to him “Isn’t dogs banned in this apartment complex?” The maintenance worker (for his own selfish reasons – you will see when you see the movie) tells him that it is true that dogs are banned in the apartment complex, but it has become so common nowadays that nobody says anything about it, except for Yun-Ju. In that same manner, it is certainly illegal/banned to give bribes to attain a higher job position, but it has become such common practice nowadays that nobody at his university says anything about it or thinks twice about it, except Yun-Ju. Also the people in power at his university had their own selfish reasons to keep that custom in place. The turning point comes towards the end of the film, when Yun-Ju is shown in his classroom, having attained the position of a professor, beginning his presentation on human behaviorism, but with an expression of a utter lifeless person that had sold his soul for a rock bottom price. In contrast with Yun-Ju, Bae Du-Na’s character wanted nothing more than to become a famous celebrity and she failed to achieve her goal, with her selfless actions to save the dog. Yet, at the end of the film she was the person that was happy and content. I shouldn’t forget to mention that the soundtrack was as perfect as the script. Sometimes light techno and at other times compelling jazz music was used, that always pushed the ambiance of the film to dizzying heights.

Barking Dogs Never Bite brilliantly shows the struggles of common people adjusting to a rapidly changing society, with old customs and new trends all colliding together. What an awesome movie. Enthusiastically Recommended.