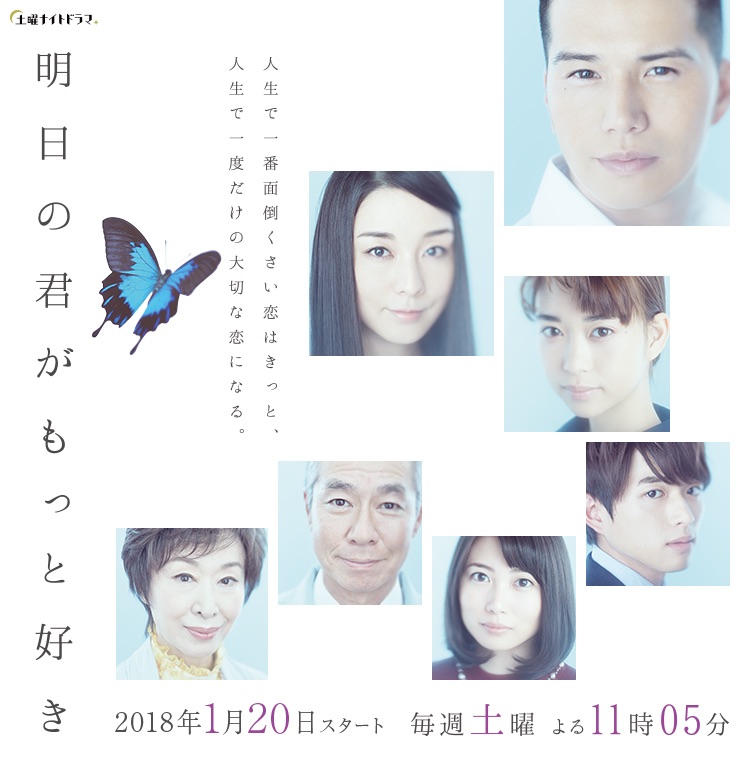 "Ashita no Kimi ga Motto Suki" tells the stories of men and woman whose love has worn off.

Ryo Matsuo (Hayato Ichihara) works at a gardening company. He thinks women are annoying. At a client’s office, he meets Akane Satogawa (Ayumi Ito) who works as a CEO’s secretary. She is admired by the male employees due to her attractiveness and smarts, but, due to a bad experience, she is not interested in finding love. She only has sex with married men. A new male employee, Haruto Kinosaki (Jin Shirasu), approaches Akane Satogawa.

One evening, Ryo Matsuo’s boss asks him if he is interested in marrying his daughter Ayaka Tanno (Aoi Morikawa) and eventually taking over the gardening company.But, Ryo Matsuo is embarrassed by the suggestion. He views Ayaka Tanno like a sister. Meanwhile, Ayaka Tanno works at a construction site during the day, but works at a girl's bar at night. She has lost her sexual identity. While working at the girl's bar, female customer Azusa Kuroda (Mirai Shida) approaches Ayaka Tanno.

Danni Sep 27 2018 10:37 pm So upset I was want to see more of Aoi and Jin's character, waiting for them to fall for each other. They had the most chemistry in this entire drama but only had brief moments

WTH Mar 31 2018 5:34 pm The ending was way to abrupt! And there wasn't much closure for any of the characters. Could have been great with all the topics being discussed but it was not. Especially the storyline of Haruhi Shirosaki. How could people just forgive him like that? He was such a creep! And that one girl who either suffered from gender identity disorder or was just a big ol' lesbian didn't really get any closure either. Also wanted someone to hit Azusa in the face. That girl was a narcissist who could only think of herself. Lock her up in a room with a fridge full of food on one side and a mirror on the other, and she would die of starvation. It was just terrible all around. Waste of my time.

Shella Marie Pangilinan Feb 10 2018 10:41 am Today’s episode was so great and exciting. I hope tomorrow is Saturday again. ;)

Karen Khoo Dec 03 2017 7:42 am Reading the plot made my head spin. It's super complicated. But I'd probably watch this for Hayato.