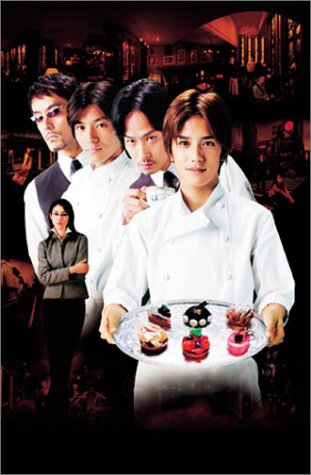 This story is about four men who work in a confectionary. Tachibana Keiichiro (Kippei Shiina) is the owner; Ono Yusuke (Naohito Fujiki) is the superb baker that has a mysterious and mesmerizing aura; Kobayakawa Chikage (Hiroshi Abe) is the waiter and close bodyguard of Tachibana; and last but not least is Kanda Eiji (Hideaki Takizawa), the ex-boxer who loves cake so much that he becomes a waiter at 'Antique'. This is a refreshing, yet heartfelt comedy about the 4 very unique personalities that work until the wee hours of the night at the small confectionary. The series follows the romance, family life, and most importantly friendship that these 4 men from different generations experience.

This is a confectionary with a "flavor" not like most. Located in the middle of an ordinary residential area, "Antique" stays open until 2 a.m. Every single thing in the shop is antique, in fact even the sherry glasses that water comes in look like they would cost 50,000 yen. On top of this, all the sweets that are sold are unbelievably delicious. The thing that is most peculiar about "Antique" though is that all 4 of the men that work here are very handsome, and each has an interesting past. Those that frequent the store also have a story to tell. -- Fuji TV

CtheWills Oct 05 2015 6:09 pm I like both the Korean version and the anime, and was hesitant at first to watch the Japanese version after watching the first episode I wasn’t sure Naohito Fujiki would make a convincing gay man. But in my desire to watch everything in my tastes that he has been in, I sat through it all the time waiting for him to make-out with at least one guy, but sadly it never happened; close, but no.

This version alters many things outside of the character Ono’s sexuality. However, what bothered me most (lack of homoerotica in close second) was the text constantly popping up in the middle of the screen. I understand why it was done, however, a change in placement would have been nice, as well as letting the actors do their job instead of telling us what to think about their facial expressions.

Would I watch it again: meh, maybe Would I recommend it: meh, only to those who like to compare and critique Would I buy it (if that was even possible): Only if it was super cheap and as a set (no volumes)

So overall, I wouldn’t say it sucked. It was fine for what it was, a feel good, chummy, light comedy.

@cynthia_lova Aug 22 2012 5:56 am I've seen Korean movie of the same name .. but it was not yet satisfied when not seen the antique's movie version of Naohito Fujiki ^ ^