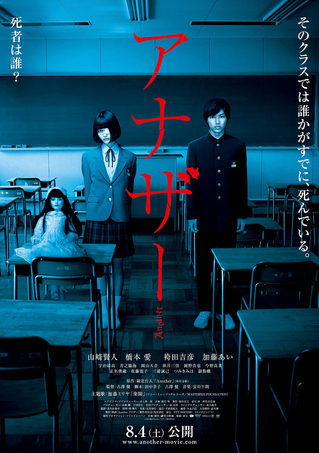 After a chain of deaths at a junior high school, new transfer student Koichi Sakakibara (Kento Yamazaki) turns to a mysterious girl (Ai Hashimoto) who holds the key to the dark mystery ...

In the spring of 1998, 15-year-old Koichi Sakakibara's (Kento Yamazaki) father goes abroad and Koichi Sakakibara goes to live with his aunt Reiko Mikami (Ai Kato), who lives in a mountain region. Not long after he moves in with his aunt, he collapses from a pneumothorax attack and becomes hospitalized. One day, at the elevator in the hospital, Koichi meets a pretty girl wearing a uniform and an eye patch. Koichi just stares at her. The pretty girl says something strange and then vanishes in the hospital mortuary. After being discharged from the hospital, Koichi goes to his new school. He finds the pretty girl, Mei Misaki (Ai Hashimoto) is also in his class. Koichi doesn't feel comfortable, because all of his classmates and even his teacher act like the girl doesn't exist. nhimura Aug 01 2013 6:49 am Wow, Yamazaki Kento and Hashimoto Ai to be together again after Control Tower! They both are really good in acting. Ai fit the most as Misaki. Mysterious yet beautiful. Well, it's a good watch, even though i'm a bit disappointed with the fire-burning-effect at the climax

5thGarde Mar 10 2013 12:31 pm i really like this one. i have a copy of this movie but no english sub. does anyony here know where could i get the english srt files of this one. pls share me the link and i will be glad to shared the link of the movie also. thanks

King Sep 16 2012 9:53 pm it would be best if Tatsuya Fujiwara take the role of Koichi Sakakibara.

Shunsuke Jun 05 2012 5:07 am Im still not sold on Ai being the best person for this role. I could name a few but I won't. I will just say I can't wait to watch this movie in August.

Rin Mar 30 2012 12:36 am Cant wait to see it. I loved the Novel and the Manga and im about to watch the Anime. @Miku the anime just finished on the 27th and this isn't debuting until August, i think its perfect timing.

Cecilie Aug 17 2011 1:00 pm Wow Ai-chan with an eye patch? o_o This looks INTERESTING. And wtf, she's starring together with Yamazaki Kento again?! That's just too funny ^O^; They starred together in Kanseitou too! :O Why is this first out in June next year? >o< That's like a year from now ;_; *sigh...*