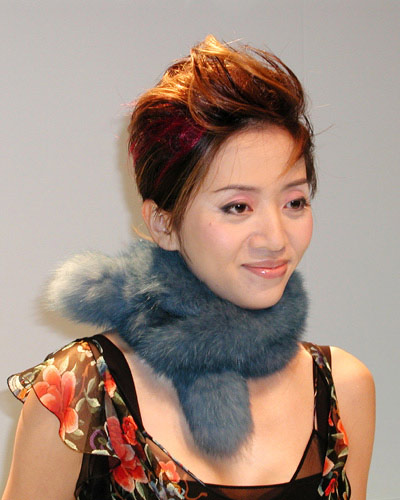 April 18th, 1992 was declared "Anita Mui Day" of San Fransisco due to her involvement in development of a nursing home.

October 26th, 1993 was once more declared "Anita Mui Day" for the efforts in continued fund raising.

Her acting career in itself, as well as her singing career is filled with awards and honorable mentionings...

Anita Mui is also well-known as an actress across the Asia region. Her films have mainly been of the action thriller and kung fu variety, but she has also taken comedic roles. In 1993, she starred in "The Heroic Trio" with Michelle Yeoh and Maggie Cheung, and it proved to be one of her most popular action films. In 1995, she found some international recognition by starring opposite Jackie Chan in "Rumble in the Bronx", the film that was largely responsible for Jackie Chan himself breaking into the American market.

Anita Mui announced in early September 2003 that she had cervical cancer and was undergoing treatment. Some of her friends and the media were baffled as to why she took so long to undergo treatment when it appeared she knew of her ailment when it was in a fairly early stage. It was widely believed she forwent early treatment because she wanted to preserve the possibility to conceive. Mui eventually lost her battle to cervical cancer and died of respiratory complications at Hong Kong's Sanatorium Hospital on December 30, 2003 at 02:50 (local time). She was 40 and single. Her sister, Ann Mui, also a Hong Kong singer, died of cancer in 2000.

Anita was originally cast for Zhang Yimou's 2004 movie "House of Flying Daggers". She resigned from her position in the movie only two weeks before her death. Zhang had held her parts of filming to the last due to her poor health condition. The filming was already 80% done when she died. Zhang didn't replace Anita's role with another actress. The screenplay was changed to take the storyline off the original character. The new leader of the "House of Flying Daggers" never appears in the movie because it was Anita's role.