A Man who was Superman 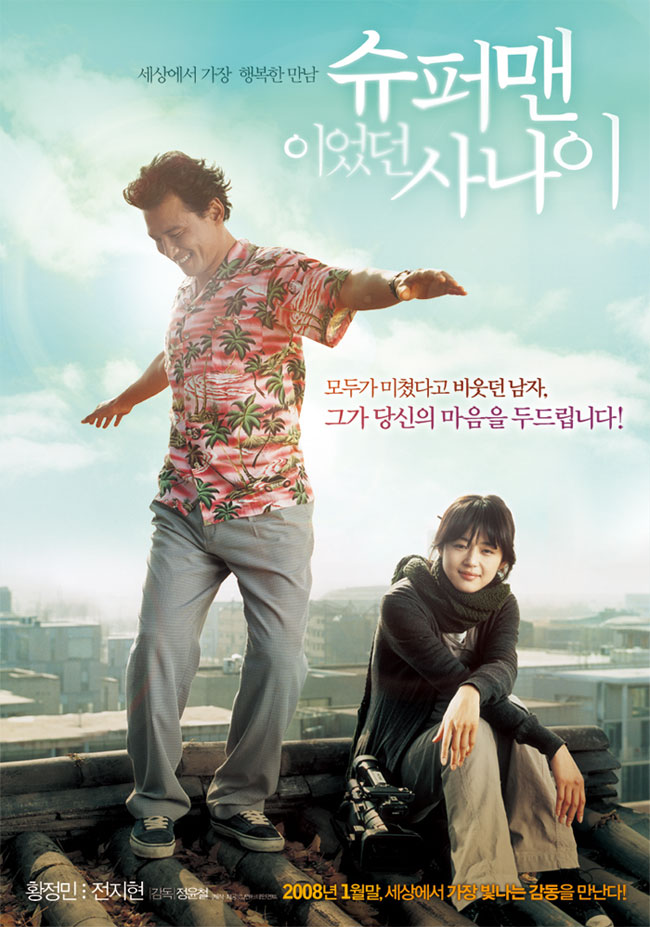 Song Soo-Jung (Gianna Jun) produces human interest TV documentaries for a small company. She is also sick of her job and the need to always dramatize the stories for maximum effect. Soo-Jung then decides to take her company's expensive video camera and to shoot a documentary on an African Lion that refuses to eat. Suddenly the shooting for the documentary is canceled, but, making things infinitely worse for Soo-Jung, someone snatches the video camera right from her hands. At the same time, a man (Hwang Jung-Min) in a Hawaiian shirt comes out of the blue and retrieves the stolen camera for Song Soo-Jung. The man tells Song Soo-Jung that he is Superman, but powerless now because of kryptonite placed in his head by an evil villain.

Even though the man doesn't have his super powers, he spends his time performing good deeds like retrieving lost dogs, reprimanding naked men standing in public and doing hand stands to push the sun away from the earth. Song Soo-Jung can tell immediately that the man is quite a character and would make for a great documentary. She then proceeds to film the documentary “Protect the Earth, Superman.” As she uses Superman for her own personal gains, Song Soo-Jung soon learns more about the odd man and what she learns will change their lives forever. Kerry Sword Aug 06 2018 1:38 am Starts out cheesy, but by the end I was sucked in. What a fantastic movie. Very moving, and well acted. Highly recommended. I loved it!

jungle_fish Jun 08 2015 10:44 am oops my comment below was cut *unintentionally hit the enter*.. BUT.. I knew until I finished the movie, it's beyond the story of insane person and careless PD, it's about the message, the message about helping people, everyone has a key, not the big one but it's small.

jungle_fish Jun 08 2015 10:38 am The beginning was very cheesy, I was like 'what the h*ck with this' movie and also people which were described in this movie typically don't care about anything, it seems impossible.

ace Nov 01 2014 7:03 am Ramenlover's review helped me enjoy this movie a lot more than I was likely to, had I not read his/her review first. I will not say it lowered expectations but it did help me from keeping my expectations from clashing with reality.

And while I agree on many of the points Ramenlover made, especially all of the ending, I think the leads themselves did a great job. I think it was the ones behind the camera that caused my problems with the film.

But still, while I had hoped for more, I would recommend it.

iliekater Aug 30 2010 4:29 pm Not to argue with RamenLover , but in my opinion this film is very good . Not just due the plot or the acting , but due to the mixture of comedy and drama this film achieves . These two kind of films are totally different and therefore it's very difficult for anyone to combine them . But this film succeeds in doing that . There are very few similar films like this one , which proves how difficult and rare it is . Another example is the Chinese "Golden Chicken" , which in my opinion is even better .

A guy, possibly insane, proclaims to be Superman, while a burned out news reporter uses the guy for her next human interest story.

There's two notable performers in the lead roles: Jeong-min Hwang and Gianna Jun (aka Ji-hyun Jeon). Jeong-min Hwang gets the flashier role of the two: a deranged lunatic with a few secrets in his closet. For Gianna Jun, "Superman" marks a break from her typical roles. She's normally identified with the cute / sweet young characters she has played in films like "Il Mare" "My Sassy Girl" and "Windstruck". Her character in "Superman" marks an obvious departure from this stereotype, you'll often see Gianna Jun with a cigarette in hand or muttering curse words in "Superman". She certainly doesn't embarrass herself in this movie, but you get a sense that she tries so hard to play the jaded news reporter to perfection that any empathy for her character gets lost in the translation.

The obvious lack of chemistry between these two "superstars" in Korean cinema becomes another problem as the movie rolls along. Again, Gianna Jun didn't embarrass herself playing the bitchy news reporter, but it was asking too much from the audience to believe that such a cynical person with her good looks would suddenly fall for a guy that's almost homeless, possibly insane, and runs around all day in the same Hawaiin dress shirt. Better chemistry would have made this angle less of a problem.

There's also an ending scene that comes out all wrong. While people are trapped in a burning building, "Superman" and the news reporter talk calmly among themselves about their problems. Maybe this scene was intended to add more drama, but it came off as two self-centered persons oblivious to the actual crisis behind them.

By the time "A Man who was Superman" rolls to the end credits you're left with an underwhelming feeling. Potential was there for a great film, but in reality you get a decent film that slightly underwhelms. 6/10
--RamenLover