A Honeymoon in Hell: Mr. and Mrs. Oki's Fabulous Trip 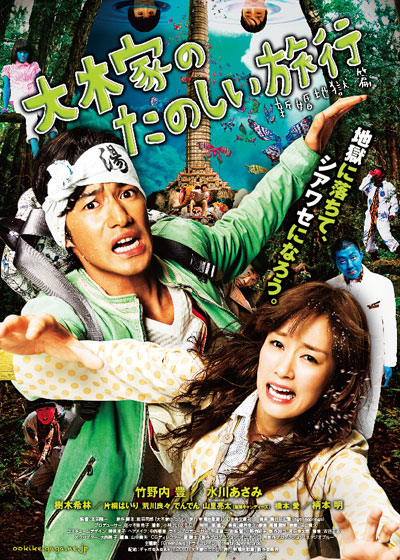 Nobuyoshi Ooki (Yutaka Takenouchi) and Saki (Asami Mizukawa) are a newlywed couple, but have lived together for a lengthy time prior to their marriage. They move into their new home, but any sense of excitement between the couple seems to have evaporated. While unpacking, Nobuyoshi and Saki notice that their rice cooker is missing.

Not long afterwards, they go to a nearby market to buy some household items. Saki passes an odd looking man (Akira Emoto) who is wearing a soaked trench coat. She notices that the guy is trying to hide something and it looks like their missing rice cooker. Saki chases after the guy, but the guy disappears somewhere on the roof of the building. There's an old bathtub on the roof.

Saki goes back down the stairs and passes a fortuneteller booth. The fortuneteller (Kirin Kiki) asks Saki if she is looking for something and then hands her a poster advertising a trip to hell. Nobuyoshi and Saki become interested in the trip and the following day visit the fortuneteller shop. The couple signs up for the tour trip to hell for their honeymoon!

The newlywed couple prepare for a 1 night/2 day trip and go to the roof. There, Tajima (Hairi Katagiri) tells them the bathtub is the entrance to hell. The couple thinks its a joke, but Nobuyoshi puts his hand into the dirty water and soon he is drawn into the bathtub and disappears. Saki follows her husband.

The couple lands in hell and wander along a deserted road. An unidentified red man (Denden) attacks the couple, but they are saved by a pretty blue skinned girl named Yoshiko (Ai Hashimoto). They arrive at the hotel Iijimaya and there Iijima guides them, but the couple can't understand what Iijima is talking about.

What is going to happen to their honeymoon and will the couple ever be able to get the passion back in their lives?

Q&A took place after a screening of "A Honeymoon in Hell: Mr. and Mrs. Oki's Fabulous Trip" at the 2011 Puchon International Fantastic Film Festival on July 15th. AsianMediaWiki editor Ki Mun was there and transcribed/translated the session.