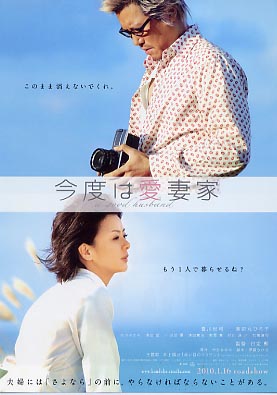 A forty something couple faces boredom as they enter their 10th year of marriage.

Shunsuke Kitami (Etsushi Toyokawa) used to be a hard working photographer, but he hasn't touched the camera in a year. His wife Sakura (Hiroko Yakushimaru) bickers frequently with Shunsuke, but nevertheless takes good care of her husband. A year ago, right before Christmas, Shunsuke took his wife on a trip to Okinawa to conceive a baby - even though Sakura doesn't like to travel. That was the last time he took a picture.

Now, despite the insistence of his assistant, Shunsuke still hasn't touched the camera. Shunsuke then decides to photograph a young actress (Asami Mizukawa), with the ultimate goal to have an affair with her. But before the affair can happen Sakura suddenly shows up.

Later, Sakura makes her own confession that she has been seeing someone else for almost a year. Sakura then asks Shunsuke to take a photograph of her to commemorate their divorce. "Take my picture" was also the words Shunsuke heard Sakura say during their trip in Okinawa ...