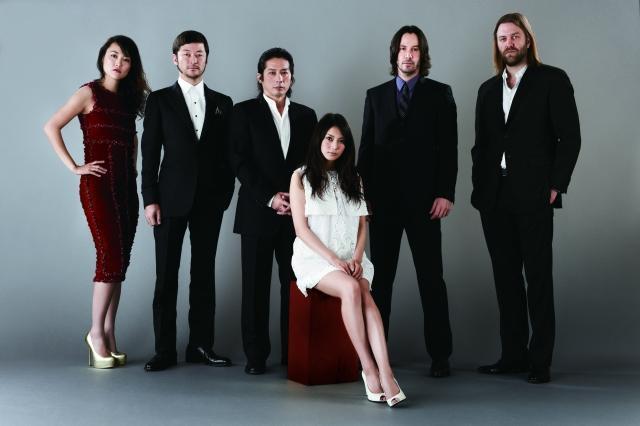 The story of the 47 Ronin is one of the most celebrated in the history of the samurai. This was perhaps all the more so because it occurred at a time when the samurai class was struggling to maintain a sense of itself - warriors with no war, a social class without a function.

Lord Asano, the beloved ruler of Ako province, kills himself after his rival, Lord Kira, frames him for attempted murder.

Bengbeng Jan 25 2014 4:14 pm don't be sad about them including Keanu, if you read the Japanese lead actors, the 3 of them have worked and i think part already of American Actors association: Cary-Hiroyuki Tagawa (the Shounen) has been working in the US for more than 20 years i think. Tadanobu Asano was in Battleship, he's that great japanese captain who helped destroy the aliens, while Hiroyuki Sanada was in Rush Hour 3, Speed Racer and Fallen Moon. Jin was also in Speed Racer

lately, the USA have been popular movies in Japan and Korea. And even if they are US made, they often cast asians nows to attract the Asian Market, just like in Snowpiercer. Been waiting for that movie to be shown.

Bengbeng Jan 25 2014 4:02 pm an amazing movie. I just watch it tonight. I'm now trying to search the history of this 47 Ronin given that it's based on a true story. I wonder where in Japan it happened as the movie credit said that a lot of visitors visit the 47 Ronin place.

nswainwright Dec 27 2013 10:56 am I quite enjoyed the film. Reeves's invented-for-the-movie character did not take over the whole film; in fact he barely spoke throughout. The unlikely love story used to bring Kai in for the western audience isn't too obtrusive (not like the love story, for example, in the Liam Neeson film Michael Collins, with Julia Roberts as the love interest with the terribly performed Irish accent) and Oishi is still really the center if one must be named. Mr. Sanada is wonderful as the once-powerful, now master-less, samurai leader and counselor brought as low as the lowest of the group, Kai, and needing his supernatural assistance to avenge his daimyo.

The monosyllabically named Kai as the 47th, low-class and outsider, ronin is in that way like the ashigaru (foot soldier) Terasaka Kichiemon of the original ronin, whose place in the story did become controversial because of his not-samurai, not-commoner position. Kai as possibly part-monster (which as a "half-breed" he would have likely been considered even without the Tengu fantasy added in) is for Western audiences more obviously "different" and suspect to his companions. That he was permitted to die with the honor of a human being, with the respect of his companions, is more of a reward than the love of the princess would be, but I guess the producers didn't feel that was enough for the market.

I loved the kirin and the fox spirit in all her manifestations, and I didn't mind that everyone's ages were changed from the Japanese tradition. I felt the filmmakers were pretty respectful of the fact that this was a Japanese story, especially in having almost solely Japanese actors, and the unnaturalness of most of the dialogue brings to mind the complicated hierarchical levels of politeness in speech that everyone would have engaged in. Academic Stephen Turnbull advised; the film had a calligrapher; it was filmed partly in Japan. I think Western critics have been unreasonably hard on the movie and I hope more people see it and like it.

jayokyo Feb 24 2013 10:25 am I agree with sherry's comment that it is sad that it is the only way more people will see Japanese actors by adding a Hollywood star but at the end of the day I think Japanese films have there own audience anyway. the film is just trying to broaden the audience spectrum ???

lulu92 Nov 03 2012 8:08 am haha, you know this is not the first remake or movie about the 47 ronins, so if you want an all asian cast, watch the previous ones, and don't you read the description, it is being directed/produced by an american so what is unfair to that, if the story is epic then it will transcend the barriers of race

Annyonomus Jul 23 2012 4:03 pm ya'll know Keanu Reeves is half asian right? that's probably at least part of the reason why he got cast besides the fact that he speaks fluent english which is why he got cast most likely. besides he's not a half bad actor.

Sherry Jul 11 2011 6:26 pm It is unfair, but keep in mind that it's the only way to be sure more people will pay to see it. The fact that it's an all japanese cast (minus Keanu) is something that has not been done before.

TOK Jun 06 2011 10:32 am Sanada and Asano are just Great actors, Rinko & Kou are best too. Asano role is the best one though! Anyway, all these Japanese actors are more talented and handsome than that jumping Holywood actor but then, his name is on the top of the cast because of the main role and being Holywood actor, even in samurai film. Unfair!

jayokyo May 03 2011 12:35 pm think kou will be amazing it, her working with keannu reeves is like the matrix meeting battle royale

Silver Apr 13 2011 10:18 pm Am I excited? HELL TO THE YES. Jin is finally going worldwide, Hollywood and music debut all at the same time! I'm so proud of him and am totally looking forward to the movie (for Hiroyuki Sanada and Reeves as well). There's not too many Japanese actors with good English so Jin's English has helped him loads. (Say goodbye to the days of Car Shrimp. lol) I swear the guy is too talented. sigh I'm so happy that after all the struggles and uncertainty Jin has faced, being criticized and bashed for leaving KAT-TUN amongst other things, he's never backed down from his dreams and now here he is, the world as his stage. I wish you the best of luck, Jin. Ganbatte! :)