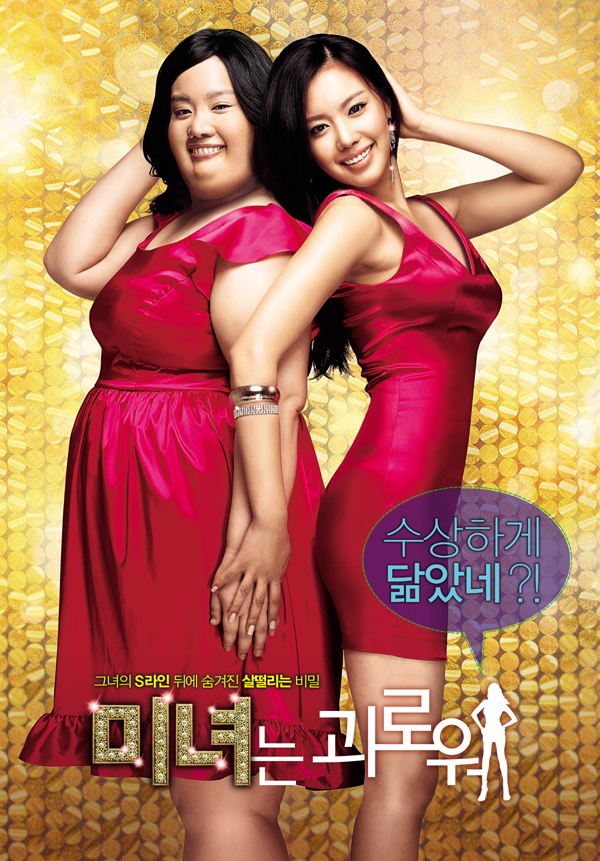 Han-Na (Kim A-Joong) is a very large girl with a warm heart. She also possesses an unbelievable voice. Han-Na wants to become a pop-singer, but due to her extra-large appearance, can only work as a faceless singer. She provides the vocals for a popular singer named Amy (Ji Seo-Yun), a beautiful young lady that can’t carry a note to save her life.

Han-Na is also in love with Amiys music producer, Sang-Joon (Joo Jin-Mo), but it's a one-sided love. One day, Han-Na is invited to Sang-Joon’s birthday party and receives a red dress from him to wear to his party. Han-Na is excited, yet scared. The dress is revealing and quite extravagant. With her very large figure, she is not sure if she can wear such an outfit. Han-Na does eventually go to the birthday party in the red dress, but is mortified when petite Amy appears in the same red dress. During the course of the birthday party, Han-Na absorbs more emotional trauma and she simply disappears for one year.

Han-Na then returns as the beautiful Jenny ... Showman Oct 28 2019 9:27 pm I loooovvve this movie. It deals with Lookism in a way that would appeal to viewers. I have recommended this movie to others and I'll still recommend it to others. SPOILER ALERT: what I love most about this movie is that she didn't need a man to date her to love and respect herself. But she still gets her man's heart in the end ♡

Lucky In Kentucky May 31 2015 8:14 pm I found that biases against the overweight seemed to be similar to here in the US-at least as compared to this movie. I certainly make no far-reaching generalizations about Korean culture based on one movie. I hope you fine Korean folks will extend the same courtesy should you watch something like Clueless. It was a fun movie, though some parts were hard to watch. The actress Kim A-Joong really did a fantastic job with the material she had. I liked that it wasn't a super happy ending either-reminded me of My Best Friend's Wedding. Anyhow, I'm thrilled at the new Asian Blaze channel that now appears in my Roku feed. It has so many movies I would never have come across. I don't mind subtitles, particularly when it means opening a while new world of films. Peace folks. We all have our struggles.

sienna Nov 24 2014 12:58 am Great movie, I enjoyed it very much. But really, the point of the movie is to criticize the belief that looks are everything. And I'll thank you to not generalize Koreans like that, because not every one of us think that only appearance matters.

grundig Oct 04 2014 8:49 pm eltos she is playing the fat and skinny characters. its called makeup and prosthetics. pretty okay movie, but from watching so many Korean dramas, the emphasis on appearance has gotten tiresome and discouraging, really. movies may present as an exagerration of real life, but there is also a grain of truth in it. not living in Korea myself, I wonder about the extent of the importance of looks and other superficial things. kinda sad, and in my opinion, kind of backward, for a country "debuting" on the international stage.

Eskimo Mar 19 2014 2:58 am It is a really funny movie which stays very true to today's superficial society. I really like ending, despite the fact that I've already predicted that she is going to reveal the truth and the crowds are going to accept, it still so perfect. The speech wasn't quite anything intellectual, deep or worldly. It was simply so personal and emotional, and that creates an impact. I really have to give it to Kim A Jong's performance to deliver those lines with such overwhelming sentiments. I hesitated to watch this movie because I always thought that the movie was just another adult comedy aimed at lonely, single woman, but I'm truly glad I decided to watch this. Jjang!

momei Jan 21 2014 6:04 pm Why does most of koreans (not pertaining to all koreans) care SO much about there looks?and do you think plastic surgery is the solution ?.....very low self esteem boost your confidence surgery is not the solution....

eltos Sep 21 2013 1:07 am Actually, she isn't that fat one. It's obvious that the fat Hannah is not really her. It's impossible that fat became slim, and beautiful in an instant in the movie.

Zathuros Jun 03 2012 7:18 pm Very real. Talks about reality of this world. Not just the world, but also humanity and life habits. This movie shows great changes on two people: Jenny (Ha-na) and Amy. I would recommend this movie to my peers, since it is also very comical.

Helena Jan 30 2012 4:40 am To previous comment by NN: You just proved youself to be even more shallow than any of the Korean artists out there. If you wanted to make a valid point then you just failed to do it. Saying that Koreans are ugly and you can't accept them because they were ugly before the surgery makes you a hypocrite. It seems that it is you that judges people by their appearance. I personally don't care if they have surgery or not, if they were plain-looking before they became famous, or if they deny doing plastic surgery. I don't really know them enough, and neither do you, to comment on their life's decisions. The world isn't only black and white.

As for the movie, I found it quite enjoyable. But I'd recommend to just watch it without listening to others opinions too much. This is a movie and isn't meant to be taken literally.

E.B Oct 06 2011 3:29 am how did kim ah joong play the role of her character's former fatter self? i'm so curious o: was it costume makeup and more or was it another actor?

Oepieck Apr 29 2011 7:27 pm i think that this movie is extremely cool the story plot is simple, make me undrestand it well i guess i will give a big applause for Kim Ahjoong who plays Hanna, :D oh yeah, i cried in the end..

Little_star Mar 28 2011 12:50 am The movie shows unfortunately the reality of the world. If you do not look like they wishes you to be then you are out of the PERFECT IMAGE. I think it really show how hard life can be. Sometimes it is easier to say. I like this movie very much especially also the actor, because he recgonized her as Hanna so her character still stays the same!

Andreea Apr 08 2010 10:19 am The movie is mediocre, a cheap parody. Pitty that the plot didn't exploit Hanna's character. I would have liked to see a strong Hanna, who despite her appereance impose herself as a singer by her inner beauty ( positive qualities) and a good voice.

Nalyah Jun 14 2009 2:16 pm Enjoyable, but a bit shallow and absurd movie. Not the best Asian rom-com I have ever seen, but it had its charms too.