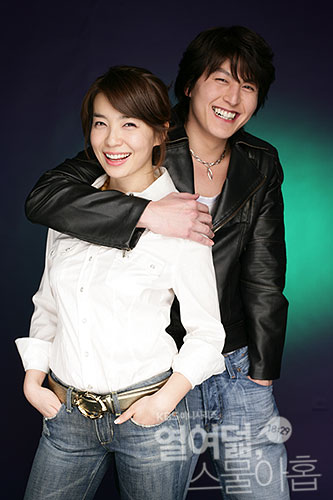 Hye-chan is a 29-year-old unhappy wife of a popular movie star, Sang-yeong. While on her way to file for a divorce, a car accident drastically changes her life. Hye-chan recovers as the same 29-year-old woman, but she thinks she is still eighteen! Although she cannot believe she is married to Sang-yeong (her childhood nemesis), their childish quibbling rekindles their lost love. Sang-yeong is a handsome, articulate and successful movie star in Korea. Due to his family’s infamous background, he first appears tepid and callous, but deep down his soul remains quite vulnerable. After a bitter quarrel with Hye-chan ends in threats of separation, she leaves home to follow through on her husband’s parting demands but returns with a shockingly different frame of mind… It appears the last eleven years of her memory have been taken away!

Pirate85 Aug 26 2018 9:40 am @BMore nailed the description. It's a good drama, but juvenile stunts of Hye Chan are just too much. Writers are confused as to how an 18 year old should behave. She behaves more like a 10 year old throughout the drama. This would have been a cute movie but since they wanted to make a 16 episode long drama, it's full of fillers. Main plot is confusion and misunderstanding, characters don't say things aloud. I liked it though, it was fun to watch a 13 year old drama and watching your now favourite actors then. I have noticed it's hard for Lee Sang Woo to act, but I'm a big fan of characters in Glorious Day, 21st Century Boy and Girl and Marry Me Now. In this drama his acting is so raw it could give you E. coli. But his character is great here as well. Maybe he gets characters like him silent and strong.

If you can skip through some part of the drama it's quite enjoyable. Plus you get to watch old mobile phones!

BMore Mar 16 2014 12:09 pm Cute light typical rom com Kdrama. Usual slow down in the middle. Had it's problems, but overall worth watching. I enjoyed it mostly for looking at the younger versions of Soo Young and Siwon and LEE SANG WOO! For Heaven's Sake! He is one of the leads in this and is not even listed in the credits above!!??? WTH??? And what happened with Lee Joong Moon? He was quite good in this and seems to have disappeared from the drama scene????????? Anyway, getting past the sometimes irritating, overly juvenile, behavior of the lead female (who is a beautiful girl) and the cliche never opening your mouth and just TELLING someone so that major misunderstandings become the driving force of the drama...I actually enjoyed it because of the fun of watching the people in it. They did a good job with the script they were given.

Neete Dec 26 2013 1:34 am Park Sun Young is ridiculously unbelievably stupid in this drama.

Luna Jun 22 2013 5:39 am I never know this drama exist, i'm proudly to watch this, even i can't stop laughing it's so funny.. although i'm a bit little late but, i could feel how celebrity couples when they broke up just because between them possbility have a misunderstandings cause an affair reason. Love this drama! ^^

Waste Nov 28 2012 7:10 pm This drama is a total waste of time. I couldn't watch more than half ot the episodes and in the middle I had to skip to the end. I regret my time. No proper acting, very forced script, etc.

fly Jan 21 2011 1:33 pm ...I actually really dislike this drama. The acting wasn't believable to me and Ryu Su-Yeong doesn't look his best here >.< One of my least favorites. I won't watch again.